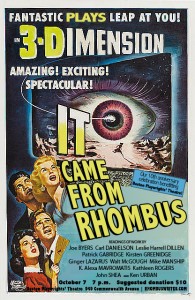 On October 7, 2013, we celebrated our 10th anniversary with an evening of readings of scenes from the first 12 playwrights.  (Joe Byers came in from Philly and Leslie Harrell Dillen flew in all the way from New Mexico!) In addition to fun scenes read by some of our favorite actors, we’ll had plenty of tasty snacks and the evening was a fundraiser for Boston Playwrights’ Theatre. (Our way of saying thanks for 10 years of support.) 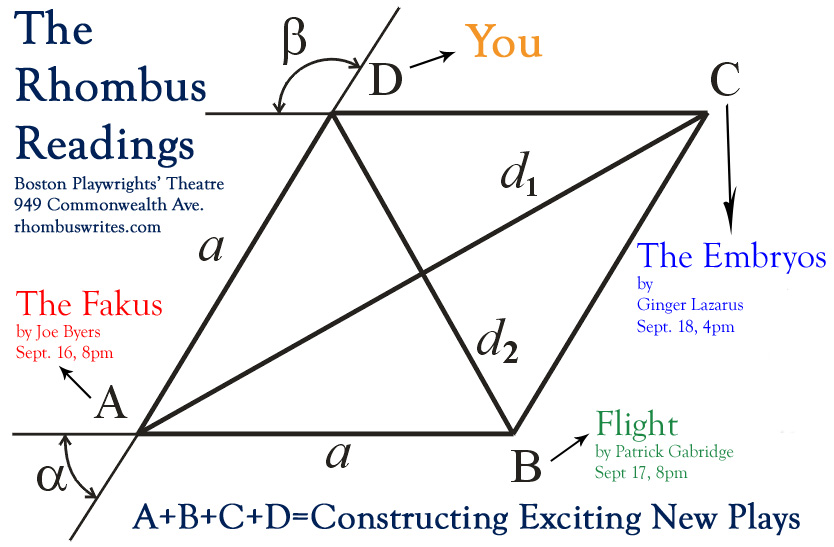 Join us for readings of exciting new plays by three of our members!

All the readings are free and will take place at Boston Playwrights’ Theatre, 949 Commonwealth Ave., Boston

The Fakus by Joe Byers
Friday, Sept. 16
8 pm
A sinuous tale of three canny people and one large sum of money on the Boardwalk in Atlantic City. All of them are deadly earnest. Trust is for sale to the highest bidder. Every heart has its price tag. Featuring Nancy E. Carroll, Paul Melendy, and Craig Mathers.

Flight by Patrick Gabridge
Saturday, Sept. 17
8 pm
Sarah spends her days in the airport, finding comfort in its organized chaos, forced anonymity, and careful security. Little does she know that beneath its clean and shining façade, the airport – like the world outside it – is littered with lives torn apart by loss. Caught in the crossfire of the airport’s lost souls, Sarah discovers there is no such thing as an innocent escape. Directed by M. Bevin O’Gara, featuring Elise Manning, Luis Negron, and Brenny Rabine.

The Embryos by Ginger Lazarus
Sunday, Sept. 18
4 pm
Mommy and Daddy love their embryos. Love them so much that when in vitro fails, they decide to take their precious blastocysts home and care for them like children. All might be well, except that “Leggo and Eggo” have voracious appetites and uncanny abilities beyond their developmental stage. When they run amok, the poor would-be parents are faced with a choice: save their embryos from the world, or save the world from their embryos. Directed by Barlow Adamson, featuring Robert Murphy and Lisa Tucker.

Rhombus led a discussion about different ways in which new plays are developed. We talked about our own experiences working with theatres across the country, and we talked with some of Boston’s most experienced people in the realm of new play development: Joe Antoun (artistic director, CentaStage), Ilana Brownstein (literary manager, Huntington Theatre Company), Jacqui Parker (artistic director, African American Theatre Festival), and Kate Snodgrass (artistic director, Boston Playwrights’ Theatre). Gary Garrison, the Dramatists Guild’s executive director for creative affairs, also joined us for the discussion.